There so many WS2812 LEDs used, most of them are soldered on a separate board for display.  Many makers use the WS2812 LED in their own projects, but, no one will tell that there a big mistake in your prototyping& small batch production.

Yes, you will get astonishing failure rate, after the reflow soldering as this man:

“So recently, I and another fellow from work ordered some of these WS2812's (neopixels) from Adafruit. We ordered them loose, so we could build our own boards here in our shop and run them through our reflow oven. We use pneumatically dispensed solder paste and a conveyer style reflow oven. The reflow curve is calibrated frequently and does not exceed 250 degrees Celsius. Upon testing the WS2812's, approximately 30 percent of the LED's had failures (missing R or G or B LED diode).”

Makerfabs encountered an alike problem, that we found almost all the WS2812 LED do not on as intended, really nightmare: 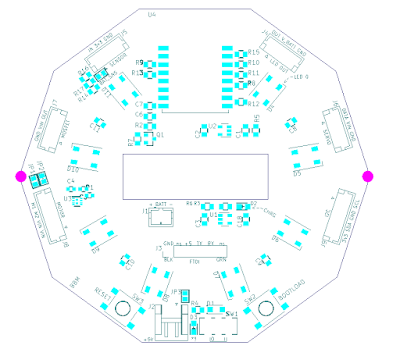 This is one of our customer’s designs, 16 pcs of WS2812 LED are serially connected to the controller module ESP12. If any LED got destroyed, all the LED follow will not be on as the 1 wire communication protocol.

The result is: there 120 pcs PCBA produced, and almost NONE of them works.

Without any other solution, we asked the WS2812 producer, they feedback us: the soldering temperature suggested  is < 230 °C … , and the Medium temperature solder paste suggested. A True Soil Moisture Sensor:  SHT20 There soooooo many companies designed kits called “Plant-Hydration-Kit”, such as the  https://www.smart-prototyping.com/Zio-Plant-Hydration-Kit-v1,  but the most significant features are that they all have a “soil moisture sensor” in their product/kit…. Like this: Or this:          But, I want to ask all these vendors, do you have used this kind of module relly, to test the soil moisture,  while try to water them? What I have tested for this kind of “soil moisture sensor” is  ugly bad…… 1.The sensor output bad.. the output data either high, or low, or unstable…. For example,  In the air, It can be 100, while a finger touches 500, while in dry soil 300, if a little water touched, 500. it changes a lot depends on how deep you dig it into the soil…. 2.No water-poof… it is impossible that you can avoid some water touch them, and the whole board got useless, and even short the VCC to GND… burn the whole system. This is a high risk even this “Plant-Hydrati Makerfabs helps Maker& Startups turnkey PCBA solutions, but truly, sometimes our customers can get components with a better price than ours, maybe because the designer more familiar with the special supply chain, or because of the tax, or different component quality. To save the customer cost, it is OK for our customers ship All, or some of, components to us for assembly works, Makerfabs PCBA service is flexible. Sometimes, bad quality components may be consigned by customers, or customers’ 3rd party vendors, which we will need to pay more attention to. In the production of  Retro , the designer Giles sends us some of the connectors for soldering. 1 year ago, we encountered a problem about the  DDR connector soldering problem , that the long connector get bend after soldered. We solved this problem by designing a special tool to press the connector, to make it not bend in the reflow soldering: In the recently soldering, we encountered another problem… The HDMI connector als